I love to dance. I was so excited when once I was 16 I was finally allowed to go to Desdemona's (the teenage/20 something nightclub in Falmouth in the 1970s where the entry fee included free pizza or pasta) on a Saturday night. I won a couple of prizes in those early years including a pair of knickers complete with the caption URA1. My first husband was 'a mover' and I have happy memories of us on the dance floor. In recent years - well more precisely the last 25 - there's been less opportunity for dancing so I relish the occasional chance I get to 'take to the floor' at a party, wedding or a conference dinner. I've never progressed beyond disco (I appreciate I’m showing my age here) except for the odd attempt at ceilidh and line dancing. (If you haven’t see it watch the episode of Gavin and Stacey that includes some of this  http://www.youtube.com/watch?v=Eb-rHnkcwZI  ). Some of the more 'formal' Latin American and Ballroom numbers are on my list of things I’d like to learn. 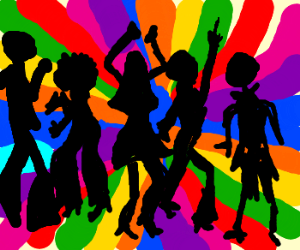 The definition of dance is:

As a verb: to more rhythmically to music, typically following a set sequence of steps.

Or a noun: a series of steps and movements that match the speed and rhythm of a piece of music.

Which, for me at least, goes nowhere near to capturing the joy a good bop can engender. Of course there's much more to dance than a good night out. How about a good night in with dancing clearly as popular as a spectator sport as it ever was with Strictly Come Dancing regularly beating the X Factor in the UK TV ratings war. There are some issues here though. Why no same sex couples? Why are women not allowed to lead? Is the knock out process really fair for with some of the professional dancers being now more well-known than the 'celebrities' sometimes it's not clear who is being voted for? Great fun nevertheless.

Dance and dancing has been part of ritual, ceremony and celebration for as long as anyone can remember; whether pagan, religious or political. Perhaps not surprisingly one of my favourites is a local example; the Helston Flora Dance (Furry Dance). On the 8th May every year, or on the previous Saturday if the date falls on Sunday or Monday, those entitled to dance (all the school children of Helston, those born in the town and others who have done something significant for it) dance through the bluebell decorated streets, wearing lily of the valley pinned on their finery, accompanied by Helston Town Band (although not Terry Wogan) to celebrate the coming of summer. Again sociological comment can be made about the  'rules' of the day. This time it is class that's the issue with workers separated from professionals and ‘gentry’ both in terms of when they dance and what they wear.  The Hal-an-Tow, a mummers' play telling the ancient history of Helston and enacting a fight between good and evil also features.